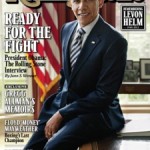 So, ever since Katie Couric asked Sarah Palin what newspapers she read, you’ve been dying to ask President Barack Obama the same question, right?

Rick Santorum probably thinks the president is a snob. Who knows what Sarah Palin thinks.