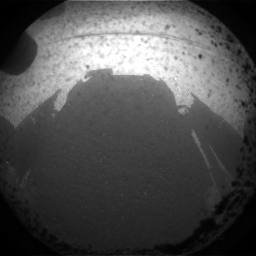 What’s it feel like to land a SUV-sized rover on Mars? Join the NASA celebration (if you can’t stand the drama, speed ahead to about 3:12 or so on the video) from early Monday morning (ET). You can see the first picture from Mars and share in the excitement as NASA’s most advanced Mars rover Curiosity has lands on the Red Planet. The one-ton rover, hanging by ropes from a rocket backpack, touched down onto Mars Sunday to end a 36-week flight and begin a two-year investigation.
The Mars Science Laboratory (MSL) spacecraft that carried Curiosity succeeded in every step of the most complex landing ever attempted on Mars, including the final severing of the bridle cords and flyaway maneuver of the rocket backpack.