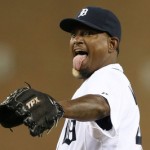 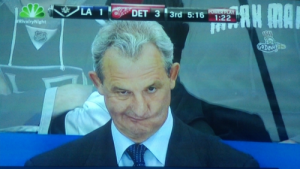 There are pictures that tell it all.
Wednesday night, Jose Valverde, nicknamed the Big Potato, returned to Detroit to close and save a 7-5 victory over Kansas City. Given that the Tigers had discarded Valverde after his playoff and World Series meltdowns (despite saving 110 of 118 games in three years), his return was just short of Lazarus rising. Nice to see the tongue wagging again!
Over at Joe Louis, LA Kings coach Daryl Suter was making funny faces as his team lost to the suddenly playoff resurgent Detroit Red Wings, 3-1.
All in all, a good night in Detroit.